While at higher altitudes there is at best already snow, the trails in the valley are still free of snow. Our interactive snow depth map helps you to plan your tour. Here you can see at a glance at www.flims.com/schneesituation where you can already expect snow on the paths and trails and where you can still be on the road without getting cold feet.

The Swiss Epic is a demanding yet rewarding 5-day stage race across the breathtakingly beautiful Graubünden, with its snow-capped, jagged skyline, and globally recognised trails. The Swiss Epic is a Legend Race within the Epic Series portfolio of global mountain bike stage races. This tour follows Stage 1 of the 2020 Swiss Epic and you can expect lots climbing, which is rewarded with incredible descending on natural and man-made trails.

difficult
Distance 58 km
Duration9:20 h
Ascent2,331 m
Descent2,331 m
2 500 metres of climbing and descending are crammed into just 60, action packed, kilometres. After a short warmup section, the challenging 15-kilometre, 1 400 metre climb to the Crap Masegn starts. After the Crap Masegn mountain station, another testing ramp awaits. But once the climbing is done the real fun can begin. A spectacular descent, with the Vorab Glacier in the background, leads you via a challenging, natural trail, through unique landscapes, with views over Flims Laax Falera. Don’t forget to take a moment on the plateau to soak up the scenic waterfall, as you cross the stream. After the narrow bridge you can relax, rolling down on gravel road for 2 kilometres, before you turn at Alp Nagens, heading up to the day’s next highlight. The Segnas Plateau offers incredible views of the Tectonic Arena Sardona: a UNESCO World Heritage Site, with the famous Martinsloch and the picturesque peaks of the Tschingelhörner. Not only will the breathtaking views delight you, the fast downhill singletrack, to the reservoir, will also put a smile on your face. Another 100m of climbing leads you to the next trail spectacle: The Nagens Trail is the world’s first mountain bike trail, built entirely with electric machinery. It’s very fun, fast and flowing, with natural elements to intoxicate every rider. The rooty trails of the Green Valley you will lead you to the next mountain biking pride of Flims Laax Falera: The Runcatrail. It promises flow and fun on a spectacular descent through a forest straight from a fairy tale. At the bottom, Lake Cresta, with its crystal-clear water, awaits. Riding through the forest which will remind you of scenes from The Hobbit, you reach the jewel of Flims Laax Falera: the turquoise-watered Lake Cauma. A final short climb will lead you back to the rockresorts for a well-deserved beer in one of the various bars and restaurants.

This is a tour that should be on every mountain biker’s to-do list. It provides incredible riding & beautiful views and a great insight into what ambitious amateurs and world-class elite riders experience during the five-day Swiss Epic mountain bike stage race, in Graubünden.

Watch out for hikers. In the canton of Graubünden we share the paths.

Inside Laax - with all tours and information

Bike Guide
Available free of charge at the guest information in Flims, Laax and Falera

By car on the A13 motorway from Zurich to Chur, exit 18 Flims

Book recommendation by the author

App
Inside Laax - with all tours and information

Bike Guide
Available free of charge at the guest information in Flims, Laax and Falera

Hiking and biking map of the Flims, Laax, Falera region; 1:25,000; available from the guest information offices in Flims, Laax and Falera

Repair and first aid kit belong in the rucksack 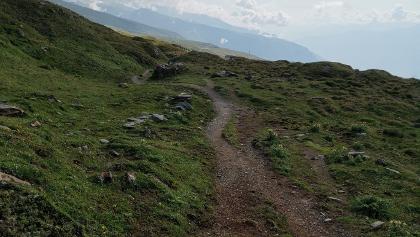 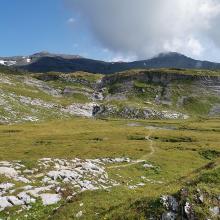 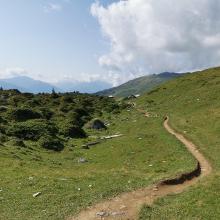 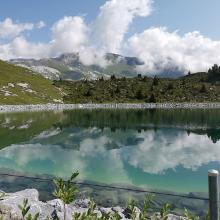