Lake Toma, the source of the river Rhine, is a special place. Even the travelling Benedictine monk of the Disentis Cloister, Father Placidus Spescha (1752-1833), already mentioned the Tomasee in his description of the Tujetsch valley as follows: "This 200-foot-wide and 400-foot-long lake is the basin from which the anterior Rhine originates. It is a beautiful area and therefore worthy of being the source of such a river."

The lighthouse: The former front light of Hoek van Holland, the 14-meter-high lighthouse that once stood at the Rhine estuary for seventy years, now stands as a harbinger of the Rhine source on the Oberalp Pass. The replica creates a first connection to Rotterdam at the other end of the Rhine. The lighthouse delights numerous mountain pass visitors and hikers in the summer as well as skiers in winter.

Lai da Tuma / Lake Toma: The 1230-kilometer journey of the Rhine begins here at the Rhine source. Much of what happens here has an influence on the river’s course. Therefore, the inhabitants of the municipality of Tujetsch - the land on which the Rhine source lies – take great care of their natural wonder. The mighty Rhine glacier once covered the entire Surselva region during the last ice age. The mountain landscape of the Oberalp Pass, formed by glaciers, is the source region of ​​the anterior Rhine (Vorderrhein). The stream of ice has long since melted away, leaving a basin in which Lake Toma is embedded into the valley of Six Madun at the foot of Piz Badus. At 2345m above sea level, the lake is a jewel among Swiss mountain lakes - unique in its beauty, magic and importance.

Oberalp Pass: The Oberalp Pass – called the "Alpsu" in Romanic - is the connection between Disentis in the canton of Graubünden and Andermatt in the canton of Uri. The highest point of the mountain pass is located at 2044m above sea level. From Disentis to Andermatt, the mountain pass is 32km long. In the Middle Ages the mountain pass allowed the Grisons access to pig and goat markets in the cantons of Uri and Ticino. Through the construction of today's road in the years 1862/63, the traffic over the Oberalp increased greatly. The romantic stagecoach age was born. The horse-drawn carriages only disappeared in 1925 when cars were introduced in Graubünden. The road is only accessible during the summer. In winter, travellers have to use the Matterhorn Gotthard Railway. The mountain pass is a popular starting point for skiers, ski tours and snowshoe hikers.

The railway line was put into service in 1926. During the first 16 years, before electric locomotives, steam trains ran only in the summer. The slowest express train in the world, the Glacier Express, also runs over the Oberalp Pass, connecting the Matterhorn village Zermatt with St. Moritz and Davos.

In July, alpine roses and sweet-smelling martagon lilies bloom along the edge of the trail.

Overnight guests with a guest card can travel by train between Disentis and the Oberalp Pass free of charge.

The hike can only be done from approximately mid-June. However, until the end of June occasional fields of snow may still be found in the upper part of the trail. Inexperienced hikers should calculate an additional hour of hiking time.

The trek cannot be undertaken with a pram or by bike.

There is no place for meals or refreshments at the lake.

The hike begins at the lighthouse on the Oberalp Pass. At first we walk along the mountain pass road and then follow a trail to Val Maighels. At point 2056, we branch off to the right and ascend in a zig zag up the mountain. As soon as we have left the last rocky bends behind us, we reach the lake. The return route follows the same path.

By train from Andermatt or from Sedrun to the top of the Oberalp Pass.

By car from Andermatt or from Sedrun to the top of the Oberalp Pass.

Parking spaces are available at the top of the mountain pass (free of charge). 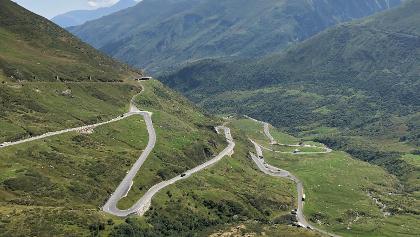 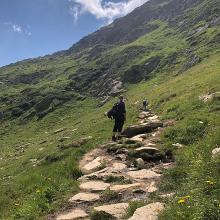 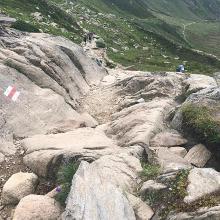 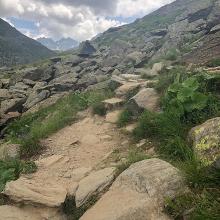