The Valle del Forno has the largest glacier of the group, which appears as a long flat expanse; this is a typical conformation of the major alpine glaciers that is rarely found in the Bregaglia group.
difficult
17.1 km
8:30 h
800 m
800 m

The valley is an important destination for ascents to snowy mountains and is also very popular during the ski mountaineering season. The Capanna del Forno is the reference point for every excursion in the basin and is located on the eastern side of the valley, at the top of a rocky ridge that dominates the entire glacier, where the view sweeps over the many surrounding mountains. The excursion is long but pleasant, taking place almost entirely on a not steep path. In the first stretch it goes through the woods near the enchanting little Cavloc lake, while in the final stretch a variant has been made to the original itinerary that in the past took place directly on the glacier and that now has considerably receded. This goes over the steep morainic bank with a slightly tortuous route. Recently, a second access route called "Panoramaweg" has been created, which runs at a higher altitude. This route is described here as a variant for the descent.

Visit to the alp of Cavloccio - direct sale of goat cheese

At the last bend of the Maloja Pass take the road to Salecina until the parking lot of Orden, where the footpath begins. First you go slightly downhill on a wide road that leads to the houses of Salecina. There a bridge crosses the Orlegna stream. On the other side of the river you follow a wide fort road to the popular Lägh da Cavloc (1907m). Continue past the alpine building and through beautiful nature, between trees and clearings, until you reach the fork in the valley where the small reservoir of Plan Canin is located. At the signpost 'Plan Canin' the paths of the two possible accesses to the hut divide. Heading towards Val Muretto, you now descend a few steps to the left to a wooden bridge over the Orlegna river.

Afterwards, the trail first goes up the mountain path on the right side of the Muretto stream until, at about 2300 m, a sign points to the entrance of the panoramic path.

Here the stream is crossed and the path climbs steeply up the northern flank of the 'Pizzi dei Rossi'; soon the small mountain lake Laghetto dei Rossi is reached at 2364m.

From here the well-marked route goes around the northwest flank of the 'Pizzi dei Rossi', passes the deeply cut 'Valun dei Rossi' at the only exposed part of the route and leads up to about 2600m.

With little ascent, the path traverses the slopes below the Pizzi dei Rossi and Monte del Forno and offers a magnificent view. The descent to the Rifugio Forno (2574m) is easy, with no exposed climbing over a slab field, before reaching the destination of the tour and starting point of many other tours, CAS Capanna Forno with a magnificent view over the entire glacier and the impressive granite peaks of the valley.

The descent is on the same or on the parallel route through the Forno Valley back to the starting point. Alternatively, the hike can be continued on a blue-white marked path over the Casnile Pass to the CAS Capanna Albigna. 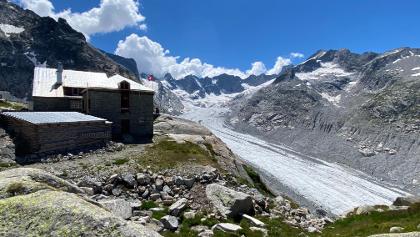 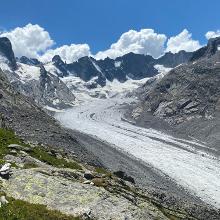